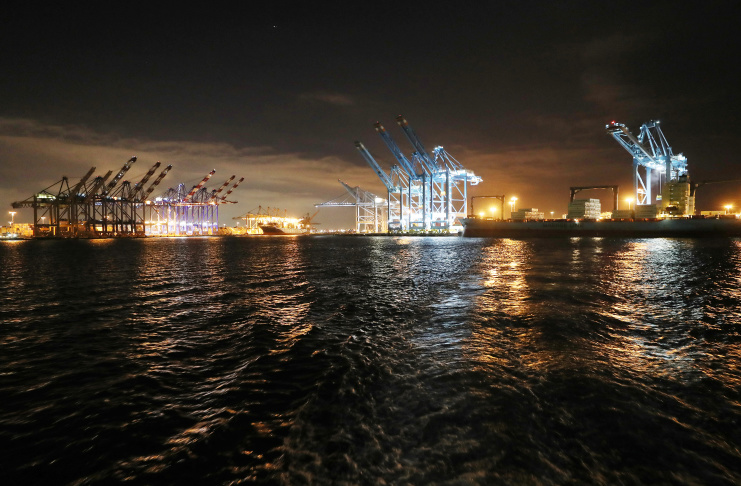 Cranes stand idle at the Port of Los Angeles on Tuesday amid ongoing ship cancellations due to the coronavirus (Mario Tama/Getty Images)
With parts of China locked down to fight the novel coronavirus, shipments coming into the ports of Los Angeles and Long Beach are way down. That means a lot fewer goods to haul for local port workers.

But some truck drivers are feeling the pain more than others — depending on their employment status.

“Before it gets better, it’s going to get worse,” said Josue Alvarez, an independent contract driver for XPO Logistics. “We’re really gonna struggle.”

Alvarez is not just losing income from the coronavirus. Every day he doesn’t work, he’s also getting deeper in debt.

Because his company classifies him as an independent contractor, like most port truck drivers, he has to pay for his own insurance, gas and other expenses.

Those costs come out of his paycheck. In recent weeks, Alvarez has received a few checks with negative balances, showing he owes the company money.

Alvarez is among the drivers who have been fighting for years to gain recognition as employees, so they can earn benefits that he said would come in handy now, such as unemployment insurance, paid vacation and health coverage.

If this slowdown continues, he’s not sure how he and his family will make ends meet.

“We do have a little bit of savings, but it’s not going to last that long,” he said.

He’ll usually pick up three loads a day, six days a week. But now, he’s working about three days a week, and only hauling one load each day.

Josue Alvarez studies at his family’s kitchen table. Normally at this time, he’d be hauling a shipment as a port truck driver. (David Wagner/LAist)
When Alvarez isn’t driving a truck, he’s a student at Cypress College. Flipping through his textbooks, he said he’s had plenty of time for school work.

But he isn’t happy about all this free time.

“I’ve got more time to do my homework,” he said. “But I still have to pay my tuition.”

THE BENEFITS OF BEING AN EMPLOYEE IN A TIME OF CRISIS

“Everybody’s nervous because we’ve never seen this,” Williams said. “To me, it’s almost like a movie, like a zombie apocalypse or something.”

But as an employee, Williams feels more security than drivers like Alvarez. He still has health coverage. If he really needed to, he could cash in his vacation days.

Plus, he and some of his colleagues are already starting to get called back in for work based on seniority.

Williams said he feels for the contract drivers — he used to be one.

“It’s like you could never really get ahead,” he said. “You always teeter totter on the edge of making it and not making it.”

Josue Alvarez doesn’t get sick days, and can’t afford to take time off.

“If I can’t move my legs or arms, I’ll definitely stay home,” he said. “But if I only have a cough or have a fever, I would get up and go to work, because I can’t afford to stay home.”