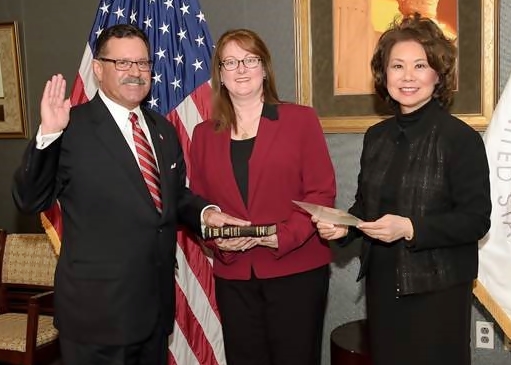 LOUISVILLE, Ky. — In his first official “grass roots outreach” with a room full of truck drivers — and only a month on the job as the nation’s top trucking regulator — Ray Martinez said he hoped the session would not be “an angry event.”

By the time the 90-minute “listening session” here at the 2018 Mid-America Trucking Show was over, Martinez was not only passionately and often loudly accused of ignoring the fate of mostly independent and small-fleet truck drivers but also was insulted personally for answering some of their questions “like a politician.”

“I came from here from being motor vehicle commissioner in New York and New Jersey,” he told the group of about 200 truck drivers. “So I’m used to not being the most favored person in a room.”

The group of mostly individual owner-operators and small-company drivers harshly criticized FMCSA for its electronic logging device rule, limiting their workdays to 14 hours, losing time on the highway being delayed at loading docks, not solving the scarcity of parking, and even for telling them when to take their rest and meal breaks.

Martinez quietly listened but made no promises other than that he would listen to their complaints and address the ones that made sense and didn’t negatively impact highway safety.

“I can’t change the law. I’m not Congress,” Martinez told the group in his introductory remarks. “I may be able to make changes to regulations, if they’re outdated, if they don’t make sense. The only way we do that is by listening and learning.”

Martinez told the group that their anger directed at ELDs was misplaced.

“In four weeks, I’ve realized, and you should also realize, that ELD might not be the issue. The issue is hours of service,” he said. “We may have some latitude to look at our regulations and see if there are things that we can do with regard to hours of service.”

He agreed that drivers waiting at loading docks creates inefficiency in the economy and said that “somebody’s trying to pick your pocket.”

“ELDs help to spotlight that there is an inequity here,” Martinez said.

Several truckers lamented that because ELD exemptions were given to agriculture haulers and some large carriers the agency was picking winners and losers.

“I just want to clarify one thing,” responded Joe DeLorenzo, director of FMCSA’s Office of Compliance and Enforcement, who was helping Martinez answer questions. “All those exemptions that are in place, most of them are statutory.”

Another trucker asked DeLorenzo: “With all the confusion that this ELD mandate has created for both the drivers and law enforcement, what’s the point? Why can’t we just stay on paper logs? Why was this necessary?”

DeLorenzo replied, “The reason for the ELD is that Congress decided they’re better than paper … I think we have to all be honest about this, that this is about the hours of service.

At one point, Martinez seemed frustrated by questions from one of the angry drivers.

“Truck drivers today came by our booth, and they say, ‘Well, here’s what we want to hear,’ ” Martinez said. “This is not about shaking your fist and saying you’re not listening to us. We’re here listening to you. Give me a suggestion.”

One driver said, “There is no one at FMCSA that has been a truck driver. It’s amazing to me how many experts there are in trucking that have never set their butt in a truck.”

“But you won’t listen to us. We are the experts,” the trucker said.

In an interview after the session, Martinez said such contentious meetings are no stranger to him.

He added, “Is there a way to build some flexibility here. We’re not going to get rid of ELDs. But we can look at the fundamental issue of hours of service, and say, ‘Can we make those more fair?’”