The History of Our Company
Throughout the 1990’s insurance agent Zack Cooper, served a growing number of intermodal drayage firms in Southern California. The unfair stereotype of intermodal drayage firms being considered “bad risks” by insurance underwriters and the unpredictability of premiums caused by external market forces made Zack and his clients increasingly weary of the conventional insurance markets.

Zack and his clients knew there had to be a better way, and it was to create their own insurance company. In 1999, Zack formed the ICANA Program. Subsequently in 2001, the process was begun to collect hard loss data on intermodal drayage firms and ultimately over 8500 power unit years of loss history from all sizes of intermodal drayage firms was collected. This data was submitted to Milliman USA, the largest actuarial firm in the country, for what would become the first ever, actuarial study of the intermodal drayage industry.

In 2003, with the Milliman Actuarial Study as the foundation, the Intermodal Insurance Company (IIC), a Risk Retention Group, domiciled in Washington, D.C. was formed. For nearly two years the IIC, RRG wrote policies for the founding members, including ICANA, based on the rates developed by our actuarial study. However, being a new company with no rating meant a lot of time was spent explaining our financial and reinsurance structure to prospective insureds; as well as those to whom certificates were issued on behalf of our insureds.

In 2005 the Board of Directors of IIC, all of whom were insured firms, made the decision to restructure the Intermodal Insurance Program to eliminate the problems arising from being a new, unrated company, while also retaining the advantages of the member-owned captive. In September 2005, the Intermodal Insurance Company became a reinsurer to National Interstate Insurance Company (NIIC) and thus our program’s policies became issued by a national insurance company admitted in every state and rated A(Excellent) by A.M. Best. Given that program retained the first $100,000 of every loss and a substantial portion of the premium, the member-owned reinsurance company stood to profit from improved loss ratios and underwriting profits. 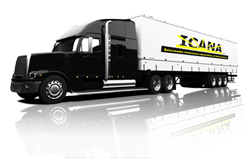 Since 1999, ICANA has flourished and become one of the most financially stable programs in the industry and continues to offer a reliable insurance program for the intermodal transportation industry. Our rates reflect the actual loss history and risk assessment from each individual insured and do not fluctuate due to outside economic factors that have no direct impact on your business.

With an A.M. Best A- rated insurance carrier as our primary partner, we are not shopping the policy to multiple carriers, rather we assert direct control of policy management, risk quotients, and coverage options. Our track record for success is undeniable and our ownership structure means there is direct accountability for the success of our company.